Owl Facts is a page, that combined with the pages Owl Pictures  and Owl Clip Art will give you great information and great pictures of owls.

The owl is a fascinating creature, different from all other birds in so many ways, with an eyesight and especially a hearing way better than most animals.

Read about the different types of owls, about their special hearing using the facial disc as kind of satellite disc, and a lot more.

All About Owls: Types of Owls

There are many types of owls, including the great Gray owl, the Eastern screech owl, the pygmy owl, the northern spotted owl, and the snowy owl.

There are over 200 different species of owls, which are divided into two groups: 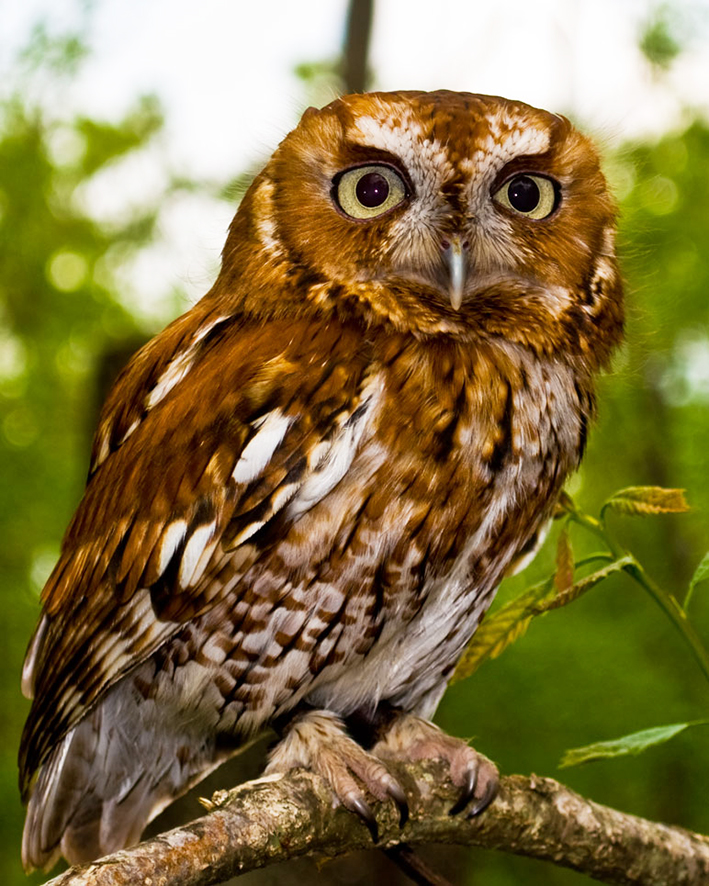 The owl uses to catch and eat its prey, which means that it falls into the 'raptor' category of birds.

Other birds that fall in the 'raptor' category include the hawk, the falcon, and the eagle.

There are 19 different species of owls living in North America, 12 of which can be found nesting in the central state of Idaho.
Nesting means that the birds actually live in a certain region, rather than just passing through for mating or migration. 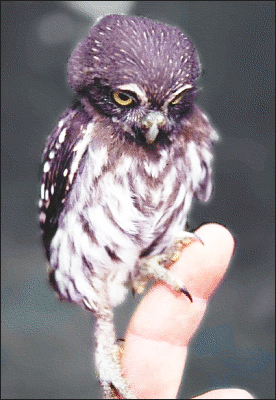 A fun fact about owls is that not all of them are nocturnal creatures, as most people are led to believe.

The majority of the owls that live in the world today tend to be nocturnal, however, there are a few exceptions to the rule.

For example, pygmy owls and burrowing owls both like to hunt during the day, making them diurnal creatures.
The great horned owl is most active around dawn and dusk, making it a crepuscular animal.
So despite the stereotypes of owls only hunting at night, there are certain parts of the world where you can actually see owls hunting during the daytime.

The wingspan of the owls tends to differ according to the species.

Owl Facts: The Eyes of the Owl

Owls are most famous for their eyes, and the eyes of the owl are truly amazing.
The main purpose of the owl's eyes is to make the owl able to see in the dark, as that is when the owl goes out to hunt.
The owl's eyes are very large in order to be able to collect as much light as possible in the dark.
The owl's eyes have special rod cells that are able to collect as much light as possible despite low levels of light.
Owls have more raw cells in their eyes than any other animal, including cats and wolves.

So even if the owl doesn't primarily use their eyes for capturing their pray, as you can read below, their eyesight makes them able to use their eyes to hunt and navigate when the sun is down.

The eyes of the owl are incredibly large, so large, in fact, that they cannot move their eyeballs in your eye sockets. While humans are able to roll their eyes, owls are not.

This means that the visual field of the owl is much more limited than that of humans.
The owl must turn its head in order to rotate its field of vision, and they are forced to bob their heads up and down in order to gauge distance due to their lack of depth perception.

Owls also have a special structure at the back of their eyes known as the tapetum lucidum. This structure acts like a mirror that reflects light back onto the rod cells in the eyes once the light has passed through them.

This means that the owl's eyes basically absorb light twice, meaning that they are much better able to see in the dark than any other creature.
You can see how the light reflects off the owls eyes when you shine a light at them in the dark, similar to the way a cat’s eyes glow in the dark. 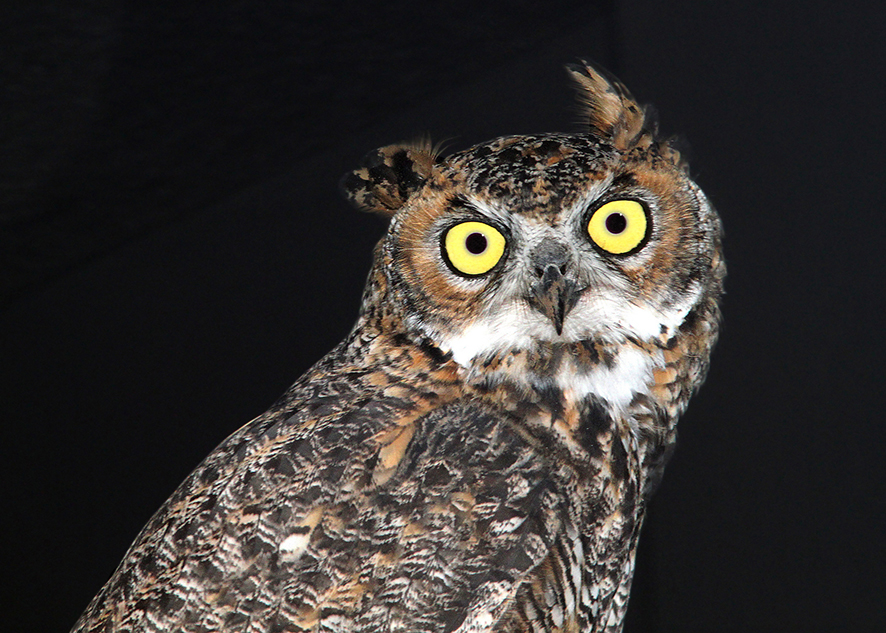 Owls and Their Ears


Surprisingly, after reading all these amazing things about the eyes of the owl, owls don't use their vision that much when they hunt, they actually primarily use their ears for hunting.

Owl ears are not actually on the top of their heads, and the 'ears' that you see are actually unrelated to hearing and are known as 'ear tufts'.

The owl has a number of body parts that work together to help the owl hear extra well in order to be able to hunt in the dark.


Some owls even have a special ear flap that they can move in order to decrease or increase the sound that is filtering into their ears.

It is amazing how well an owl can hear.
A great grey owl can locate a vole from 60 feet away even when the vole is running in its tunnel buried beneath a foot and a half of snow. 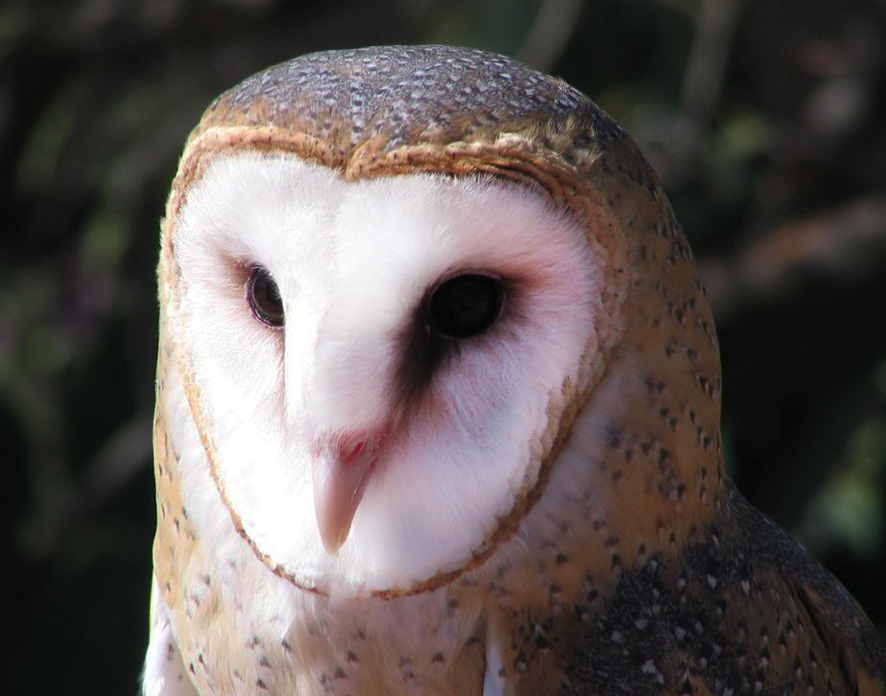 Barn owls are able to capture their prey even without the use of their eyes, but they are unable to do so without the disc-shaped feathers on their face or if their ears are plugged.


What Do Owls Eat?

Owls will basically eat anything they can get their talons on.

Seeing as they are predators, they eat small animals according to their size.
The small owls like pygmy owls or saw-whet owls will usually hunt for mice and shrews, as they are too small to hunt larger game.
Voles and mice are the two dinners most commonly consumed by the average owl, and owls can actually benefit humans by keeping the population of these rodents down.
Large owls tend to hunt larger prey, such as squirrels, wood rats, voles, and rabbits. The larger the owl, the larger the prey it tends to hunt. 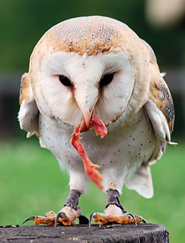 Great horned owls sometimes even catch skunks for dinner, as well as bats, fish, toads, scorpions, snakes, frogs, lizards, and even other small birds.
The great horned owl is often known for fishing for its dinner, and it is not uncommon to see an owl swooping down and dipping its talons into the river to pull out a fresh fish.

Due to the fact that many farmers consider mice to be a pest, owls are often seen as a blessing for farmers who are trying to control the number of mice present on their farms.

One barn owl must consume roughly 79 pounds (36 kilos) of mice per year.
This adds up to nearly 800 pounds  (400 kilograms) of mice during the 10 year lifespan of the average owl.
At roughly 1 ounce (29 grams) per mouse, an owl ends up eating nearly 13,000 mice during its entire life.

Seeing as how mice need to eat roughly 10% of its body weight each day, the number of mice an owl consumes during its lifespan equals roughly 15 metric tons of food less being consumed each year.

Owls are usually fairly sedentary creatures, who prefer just to hang out or snooze on around the clock. 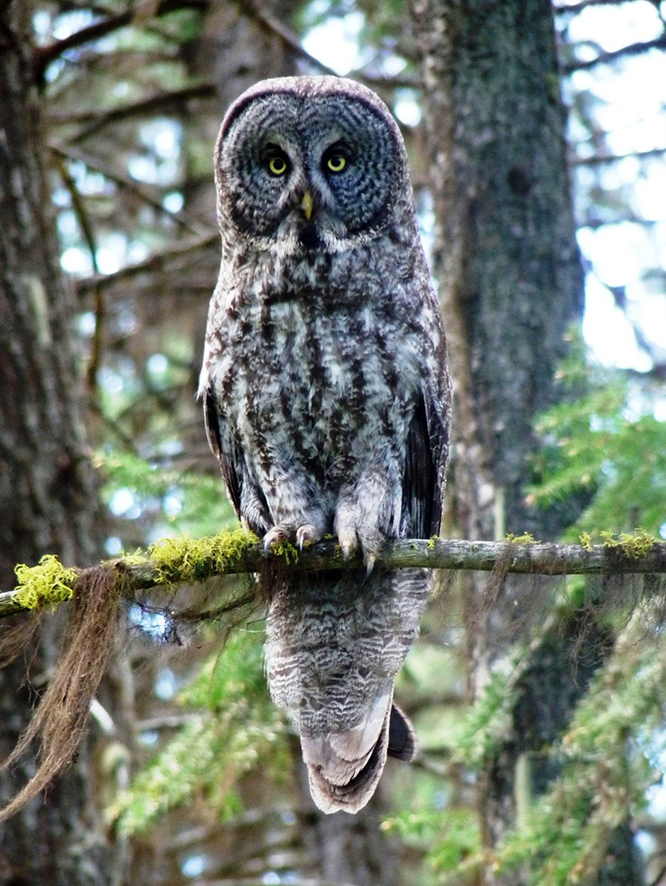 Most owls will only be active when they are feeding their young or going hunting for dinner.

An owl that is napping will usually try to blend into the tree where it is resting.
Owls do so by stretching as tall as they can with their ear tufts extended and their eyes closed. They will usually stand perfectly still and will blend in with the branches of the tree in order to fool any enemies who would see the owl as a tasty lunch.
Owls will assume a defensive posture when their young are threatened.

The defensive posture of the owl includes fluffing of feathers in order to appear twice as large. The owl will also raise its wings like and spread the feathers of its tail.
The owl will then clack its bill and hiss in order to drive off any predators that would be attacking their young.

This posture is often enough to convince potential enemies owls are not worth attacking, and they will usually let the owl alone.

Most owls are known to be extremely fierce when it comes to defending their young. Great horned owls are famous for their fierce defense of their youngsters, as they often dive bomb intruders who get too close to the nest. They will use their feet and talons to attack the intruders and drive them away from the nest.

Those who live near large owls should be very careful to not anger them during their mating season and the period in which their offspring are very young.

Owls have few natural enemies, as they are fairly mild mannered creatures that tend to mind their own business.

Humans are responsible for 96% of the deaths of owls around the country.
The Great Horned Owl’s primary enemy is other Great Horned Owls, and most other owls have few enemies.

Seeing as they are 'raptor' predators, there are few other predators that attack them. 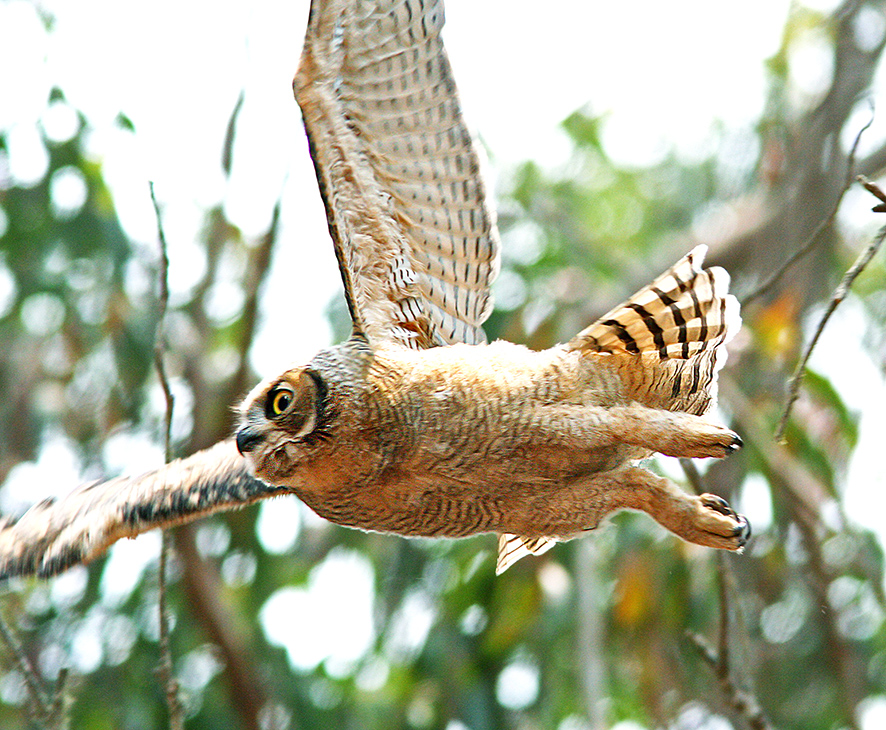 Let's get down to the fun owl facts:

Did you know that:

Female owls are heavier and the larger then the males. Owls wings are large for their body and thus allow them to fly much more easily and with much less noise than other birds.

The average owl doesn’t make its own nest, but simply nests in the hollow of a tree or in an old nest belonging to a crow, raven, or hawk.

The diet of an owl can be determined by the pellets left at its roosting sites. The pellets contain all of the undigested parts of the owls prey, such as the teeth, hair, claws, and bones.

The owl’s foot is structured in order to make it easier for the owl to grip branches. Two of the toes on the owl’s foot face backward, while the other two face forward. The owl’s third toe can often be rotated forward when the owl is perching. 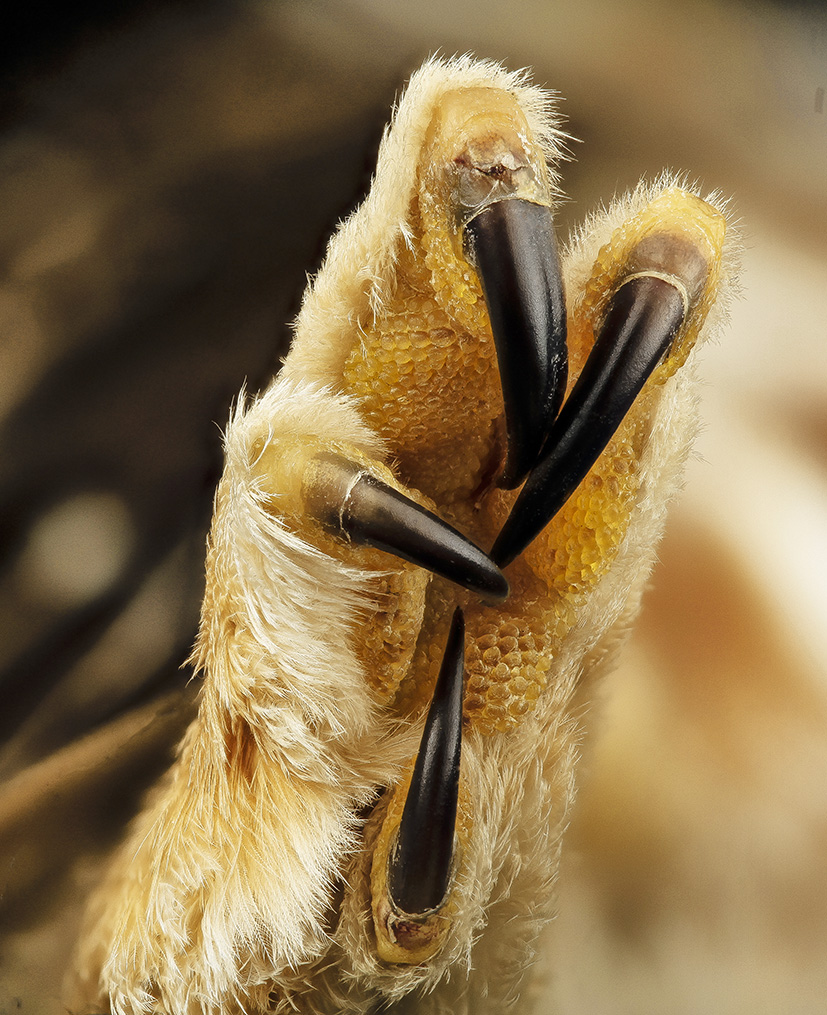 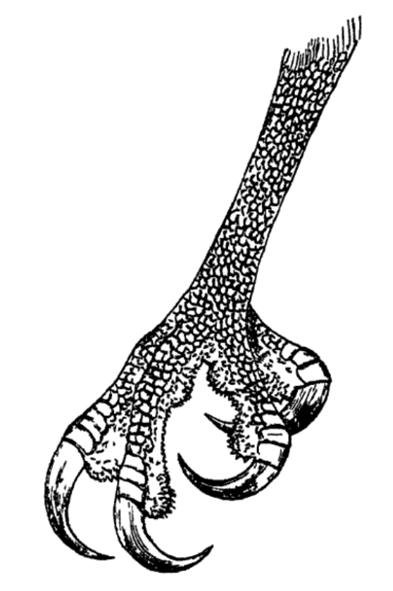 Owls are found everywhere around the Earth, except for Antarctica and Greenland. Owls will mate for life.

A group of owls is known as a parliament. (A funny reminder of how grave and serious owls appears to be.)

Owls are able to twist their necks and turn their heads up to 270° without ever having to move their shoulders. 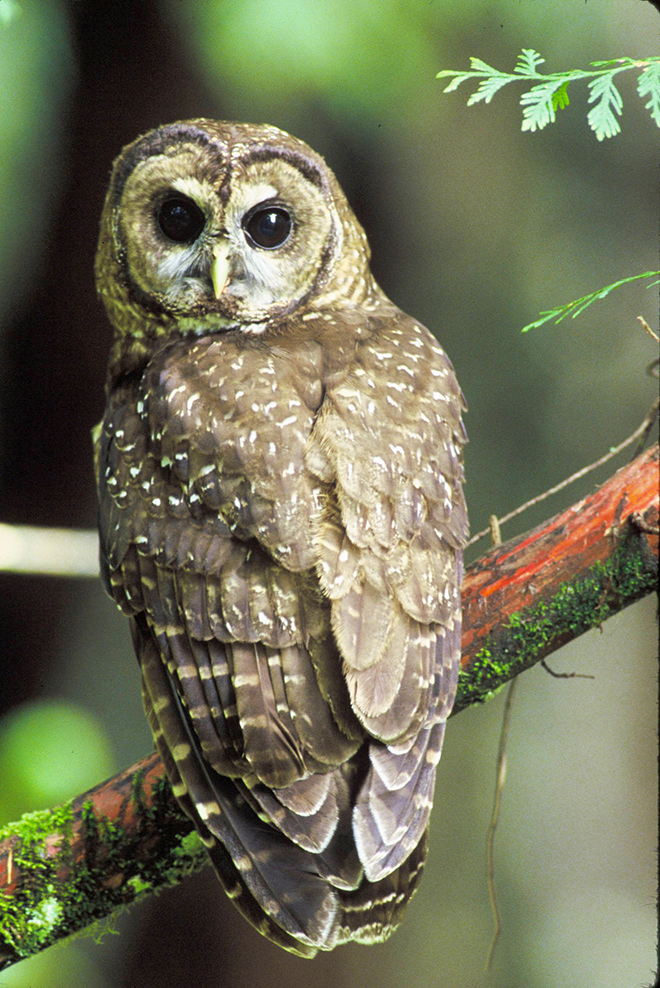 Owls have three eyelids. The upper lid and lower lid function like regular eyelids, but there is a third layer of tissue that moves from the inside of the owl’s eye to the outside. This third eyelid is designed for cleaning the eye.

Owls appear in hieroglyphics found in Egypt, and they can be seen depicted in 15,000 to 20,000 year old paintings on caves in France.

People in the olden days were very superstitious about owl.
If an owl hooted three times on the left side of a hunter, the hunter would immediately stop what he was doing in order to avoid bad luck.
Many people believed that the hoot of an owl was responsible for illnesses like tonsillitis, and pregnant women were afraid of birth complications if they heard the hoot of an owl as they were giving birth.
Others believed that hearing an owl hoot indicated that someone was about to die, and would throw salt into a fire in order to prevent the 'bad luck' associated with owls.
Of course this can not be considered owl facts today :-)

Back to the top of this page about Owl Facts

Visit other pages relevant to this one, and Homepage: 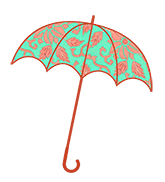 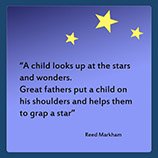 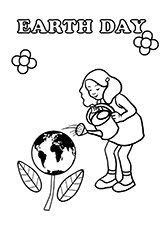 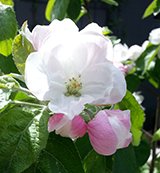 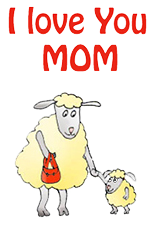 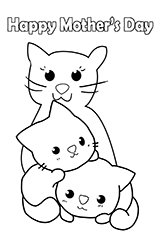